Congratulations everyone, we made it this far. Christmas and 2021 are just around the corner.

Winston Churchill said “If you’re going through hell, keep going”, so by 2020 standards, even just making it this far is an achievement.

But perhaps for the first time since World War II, maybe even longer than that, everyone around the world is experiencing the same thing at the same time. The pandemic is a global experience.

I am sure that just as the stories about the earthquake still get a run at BBQ’s around The Hunter thirty years later, we will be talking about 2020 for a long, long time to come. So for Precision, like everyone else, this is not an ordinary year.

My 5th year in business, 2019 wrapped as our biggest year yet. We surpassed the goals set for the year, smashing many of these. Leading into Christmas, we were six months ahead of where we needed to be. So the year ended with a well-deserved and extended Christmas break, the longest break I had in twenty years.

Refreshed and looking forward to another great year with even bigger goals, we were ready to go, but with no New England Patriots in the Super Bowl in February, we were still off to a great start.

Community Support is essential to us. It is an integral part of what Precision is. This year we expanded our commitment to our region by amongst other initiatives, continuing our sponsorship of Hamilton Olympic and the development and presentation of financial literacy and budgeting strategies through Allambie Care.

Through my role as Treasurer of The Newcastle Show, I can help carry on the 120-year-old tradition of providing an Annual Show for our community. The 2020 Show was held over the first weekend in March, and it was a huge success. It was over this weekend that concerns about Coronavirus in Australia were raised.

By the following weekend, the Melbourne Grand Prix was cancelled. Kelly had already arrived in Melbourne ahead of the event when this was announced, and despite the obvious disappointment, the announcement came at a time when Precision was getting its first look at what we might be in for over the next few months.

Following the prime minister’s announcements on the 12th March, we, like many businesses across the country, began to implement our Coronavirus emergency measures.

With many experiencing things like; Working From Home, Zoom, Microsoft Teams for the first time, Precision had already invested heavily in the latest technology over the past years. Our award-winning systems meant that we could keep assisting our clients no matter what happened. By this time, Kelly has been working from home 40% of the time. Thankfully, a lockdown and work from home orders meant business as usual.

Whilst our systems were ready to handle the unexpected; it is fair to say that the accounting profession as a whole was not expecting the onslaught to come.

On 12th March, The Prime Minister and The Treasurer announced a $17.6 billion economic stimulus package. When Federal Budgets are usually referencing millions for this project, and the millions for that project, and then the Treasurer talks about billions available for immediate support, you know the shit has hit the fan. During The Prime Minister’s speech, whilst he was standing at the podium, I received 11 calls from clients wanting to know what was being done to help them. The panic and confusion were real.

In the following fortnight, and through the October Budget and again in the recent weeks, the Government has announced unprecedented economic stimulus schemes such as the JobKeeper Payment, Cash Flow Boost, Home Builder, Job Maker, and more target industry and household support. The range of programs, many of which require Tax Agent’s to assist in the delivery are enormous.

I was still a new graduate when the Howard Government announced A New Tax System in 1999, the legislation covering The Goods and Services Tax, amongst other things, and thought that was challenging. Nope. That was nothing.

Many in our profession would agree that the periods during these Government announcements with rules, dates and requirements continually changing, were amongst the most stressful and difficult times in our careers.

I became an accountant to help people, as corny as that sounds, and despite the burdens of helping deliver these policies, I feel a great sense of reward in being able to do so. I didn’t expect that with the view that the economy might collapse and entire industries were on the precipice of closure, I would need to operate a triage station. At least this is how it felt.

I want to thank our clients for their patience and support during this time. Their understanding of the pressures facing not just Team Precision but our colleagues in the profession, around the country helped make sure we could deliver.

I am very proud to say that since March, we have met the challenge. We have helped our clients get through the most challenging economic crisis in our lifetime. I am especially proud of Kelly, who has been a shining star through the most challenging times. She ensured our systems were set and our processes were quickly adapted so we could deliver in the continually changing environment.

Performance reviews, usually a monthly feature were held virtually, social distancing and guest tracking in the office became a thing, but through it all, Kelly and the Team delivered. 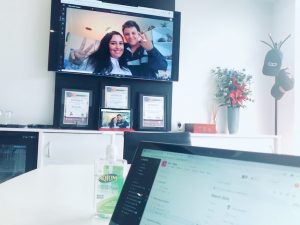 From a personal point, 2020 has been a particularly tough year, having endured the loss of family and the realisation that there is more loss to come. A lesson I have learned this year through bitter tears is that when you believe that it just can’t get any worse, it can.

But there were highlights too.

For the second year running, Team Precision was named as finalists in the Australian Accounting Awards. As finalists in the categories of Professional Development Program of the Year and Wellness Program / Initiative of the Year, we competed with accounting firms from across the country in the most significant awards of its kind in Australia. There was no ballroom, no table service, but we had a great time celebrating virtually with the best in our profession.

We have continued to experience growth across several metrics, a trend that has continued each year since Precision opened its doors. This growth underlines that we are doing more than some things right. We are a continuing work in progress; the finish line never ends.

It has been exciting to welcome to Team Precision a number of trainee’s thanks to the Government’s Job Maker initiatives. These new additions provide us with the opportunity to continue to grow, share our experience with Tem members eager to learn and help our clients.

Perhaps the most rewarding part of 2020 is seeing how our clients have responded to adversity. One client during the peak Covid period lost $372,000 worth of work in a fortnight. All cancellations just before work were due to commence. Yet they have ended the year with a rebrand, a new passion for business and have won back more than they lost.

In the middle of all the chaos, there are clients who struck out on their own to start a business and take the risk to strive for a better life.

Then there are those who have stuck at it, taken the losses, showing up to work every day and trying to make an improvement. I may be the advisor to our clients preaching resilience, but there are times when they inspire me.

Again, I would like to thank you for all your support throughout the year and wish all of you and your families a very merry Christmas and safe Holiday period.

If you are feeling festive, we welcome you to write a review on Facebook, Google or give us a recommendation on LinkedIn.